Photoreflectors (or sometimes called reflective interrupters) are composed of an infrared LED and a phototransistor in one housing, similar to the previously discussed transmissive photointerrupters.

The main difference is, that the IR emitting LED and the phototransistor are not positioned face to face like in the transmissive interrupters, but the emission and detection direction of both devices are oriented parallel to each other in the same direction. If there is no reflecting surface positioned above the device, the IR radiation emitted by the IR-LED “is lost” in the space above the device and there is no photo current through the phototransistor. If there is a reflecting surface present within distances smaller than the detection range, the infrared radiation is reflected to the phototransistor and a photocurrent is generated. 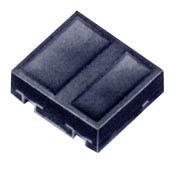